Our School » About Franklin Elementary School 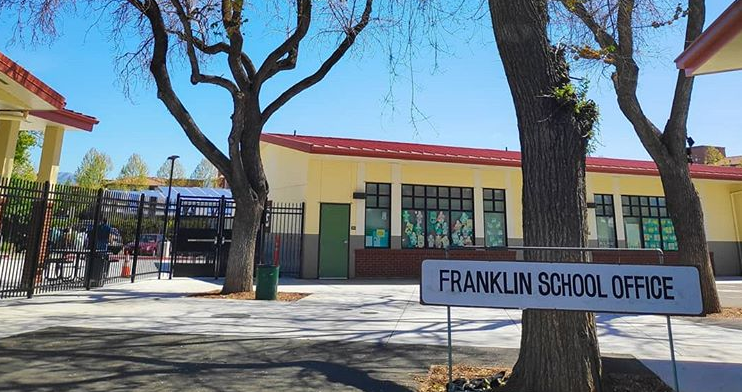 Early history of the Franklin–McKinley School District is difficult to find. Although an article by Martha Craig written in the mid–60’s indicates that the first school located adjacent to where the fairgrounds are located today was Franklin School. Senora Josephine Narvaez, a mother of 14 children was the original founder of Franklin School. About 1868, she persuaded her father, Don Pedro Chaboya, to give a ½ acre site from the original Spanish land grants of King Charles of Spain for the purpose of building the school.

The school was a one room structure, measuring 16 x 20 feet, built at the corner of Monterey and Tully Roads. Two windows furnished the light, and almost every board in the small building was full of knot–holes which were conveniently used as peep–holes to survey whoever approached the school, and most surely provided much needed ventilation in hot weather. The rough boards had been donated by interested and generous people in the community. A fire sometime in the 1870’s burned down the original school, and a second school was quickly constructed, though no description exists of the school.

In 1895, the third Franklin school was built on the same site as the previous schools. The architecture was typical of schools in the Santa Clara Valley of that era. The new school was a white, wood–frame, three–story edifice, including a basement and an attic topped by a high gabled roof. Ten wide steps led up to the round arches that formed the covered entranceway to the corner. At the top of this corner, there was a belfry in a bell–tower which extended above the high roof. The windows were very high and narrow. The schoolyard was enclosed by a hitching rail built of white wood posts spaced about 10 feet apart which were connected with steel pipe. Tall trees enhanced the lawn in the front. In one picture, a horse could be seen grazing along the fence. Large potted plants were lined up at the entranceway to the building and used to indicate where the students would line up to march into the building.

The schoolhouse had 3 classrooms downstairs and a library. On the second floor there was a large “L” shaped room, which had folding doors that could be used to divide the room when it was necessary. Special programs were often held up there on Friday afternoons. Parties were given for pupils at Christmastime and at the end of the year in June.

Apparently a mother’s club had been in existence at the Franklin School for some time, however on Friday, January 20, 1914, the first meeting of the Franklin Parents and Teachers Association was held. This was an outgrowth of the earlier Mother’s Club. Examination of the records provides an interesting picture of education in the first decade of this century. They adopted a constitution and fixed the dues at 20¢ a year. At their second meeting, a talk was given on child welfare and the home credit system. In September of that same year the subject of electric lights and drinking fountains were discussed. In 1931, the San Jose Mercury News ran this headline, “Franklin School Opens Today.” It stated that 115 pupils would take up their studies after Christmas vacation in a new $45,000 school building. It was leaving its 63 year old home–site at the corner of Monterey and Tully and moving a quarter of a mile east on Tully Road. This fourth Franklin School contained an assembly hall, basement, large dining room and kitchen.

In 1936, the records mention for the first time, the possibility of unionizing Franklin with Oak Grove, McKinley or Jackson. It was decided to contact the trustees of the other schools and discuss a proposal with them. In that same year, a decision was made to buy a school bus, build a garage, hire a driver, and apply proper insurance to maintain the bus. A newspaper account on September 18, 1937 read that the Franklin School District had a new 57 passenger bus. Two trips were necessary to transport the pupils and the bus proved to be a good investment as it served the district for 30 years, until 1967, when it was retired.

The Franklin site now had in addition to its school building, a water tower, a one car garage and a basketball court. In 1942 a new principal, Mr. Oscar DeReschke, who was to serve the District for 18 years, was hired. There were six teachers; two more were hired in 1943. Then the influx of people in California during WWII brought an increase in enrollment to 334 children.

In January of 1948, the merger of the Franklin School District with the McKinley School District finally took place. Due to the impetus, of the state of California seeking unification of small Districts, budget and enrollment problems, the trustees from both Districts got together and agreed to merge. A merger was affected, rather than a unification or unionization because the two schools were less than 3 miles apart. It was decided to combine the two names in order to keep the identity of the two Districts.